February 01, 2021
I don't think I've ever met a person who didn't like some kind of pierogi, I say "some kind of" as there are many versions of, where I grew up - Poland. From sweet, fruity ones to savoury filled with minced meat, cabbage, mushrooms - there's a pierogi version for everyone. There's also a lot of traditional only veggie fillings too!
The most popular meat free pierogi are sweet ones with cottage cheese filling. That cheese filling is accompanied by strawberries, blueberries or simply a bit of sugar. There are also purely vegan ones too, like cabbage & wild mushroom pierogi, which are most popular during Christmas celebrations. 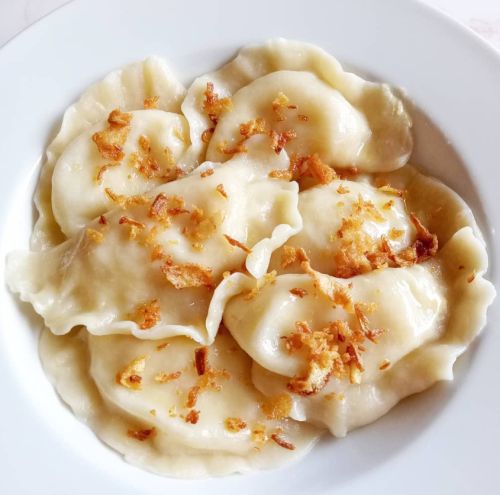 My most favourite pierogi filling is what's called in Poland "ruskie". Ruskie pierogi arrived from a pre-war region of Poland, which is now a part of Ukraine. Indeed, before 1945 Ukrainians used to call this particular variety of pierogi "Polish pierogi". It is likely that - “pierogi ruskie” were created by Poles living in Ukraine at the time. 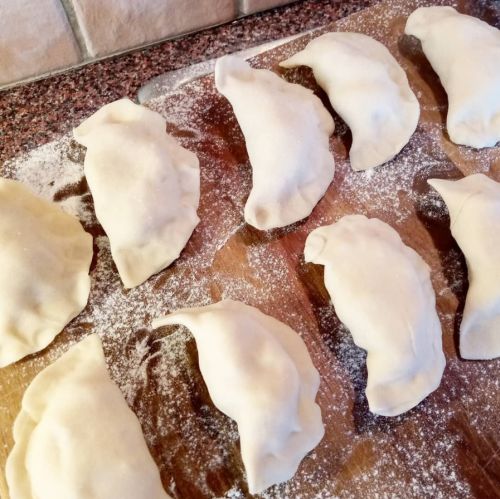 This egg free pierogi dough can be used with any filling you want, it freezes well too. If you're looking to cut eggs from your diet I've put together a list of vegan egg substitutes, that will help you to choose the best one, depending on what you're making.
How to make it...
Ingredients:
- 4 cups all purpose flour
- 1 1/2 cup super hot water (plus 1/2 cup more if needed)
- 3 Tbsp sunflower oil or similar light flavoured oil
- 1/2 tsp table salt
The above quantities will make about 70 pierogi, but you can easily half the amount of ingredients.
Method:
- Place all the ingredients in the bowl and using a spoon start mixing them altogether, starting to knead after a while (after water cools down slightly and you can handle it with your bare hands).
- Once it forms a uniform ball (yes, it will be quite stiff, but should be play-doug consistency, not sticky! use more water if needed) leave it the bowl, covered with a cling film for minimum 30 minutes.
- In that time, the dough will become softer and easy to roll and work with.
- After those 30 mins divide the dough into 3 equal parts, keeping the parts you're not working with tightly covered.
- Dust your work surface with a bit of flour and roll a piece of dough till about 2mm thick.
- Using a round cutter (the size is up to you and how big you want your pierogi) cut discs of dough.
- Place the filling of your choice in the middle, using your finger dipped in water dampen the edges of the pastry disc (so it sticks nicely together), close and seal pierogi.
- In a rather big pot, boil plenty of water, add a heaped teaspoon of table salt into it.
- Once the water is boiling, put few pierogi at a time, as to not overcrowd them.
- Simmer pierogi on medium heat (making sure that the water bubbles slowly all the time) for 2 minutes from the moment they resurface.
- If your filling was already cooked, which is almost always the case with plant based fillings for pierogi 2 minutes is enough, if you want you can simmer pierogi up to 3-4 minutes.
- Serve immediately, while still hot.
✅ Filled pierogi can be frozen before cooking. Place them on a baking (parchment) paper, on a tray in a single layer and place in the freezer, once they're fully frozen you can transfer them into a bag. Cook from frozen, for 6 minutes from the moment they resurface.
Smacznego!
You may also like: 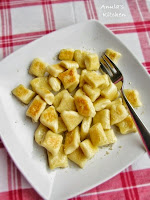 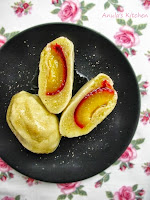 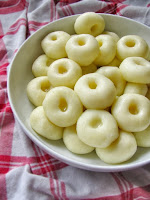 Have you made any of my recipes? Tag @anulaskitchen on Instagram and hashtag it #anulaskitchen
Budget recipes Cuisine - Polish Dumplings & pierogi