November 09, 2015
We love pizza at my home. And what's not to love?! A piece of yeasty dough topped with thick tomato sauce, melted cheese, crunchy peppers... But sometimes (especially after a long day) the mere thought of making the pizza dough prevents me from actually making it. Yes, I admit to occasionally going for the easy option - store bought pizza. No, I'm not proud of it, but let's be honest here - it's cheap, it's quick and we'll all polish it off. Yes, I have no control over what goes into it, both into the dough and on top of it, but it's also something I don't buy on a regular basis. I think, I have found a resolution to the long process of making the pizza base though... 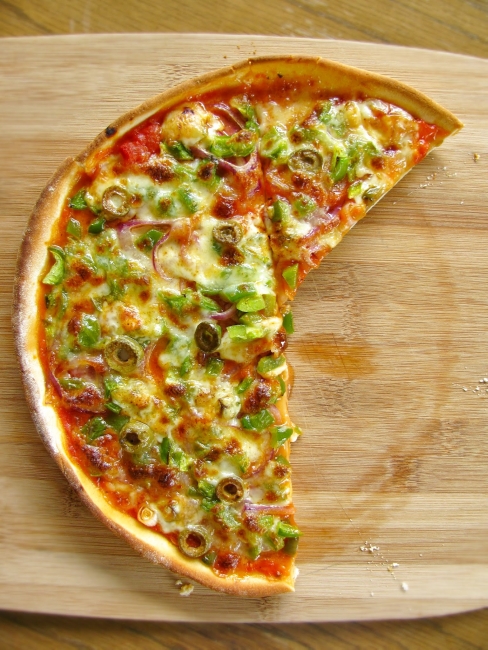 One day recently, I couldn't figure out what to make for dinner. I couldn't figure it out, as first - there wasn't much in the fridge, second - I didn't have much time to make anything! All of a sudden, I thought "surely there must be something in all those many cookbooks that I can make, with what I have at hand". And there it was! The recipe for this pizza base comes from "30 minute meals" cookbook by Jamie Oliver.
Jamie's quick pizza is indeed a quick thing to make. You substitute the daunting task of kneading the dough and the time constraint of rising it, with a bit of a quick "hand action" (or food processor) and self-rising flour. It's also very quick to assemble and bake. You simply fry the dough on the stove for about 3-4 minutes, and then finish it under the grill. 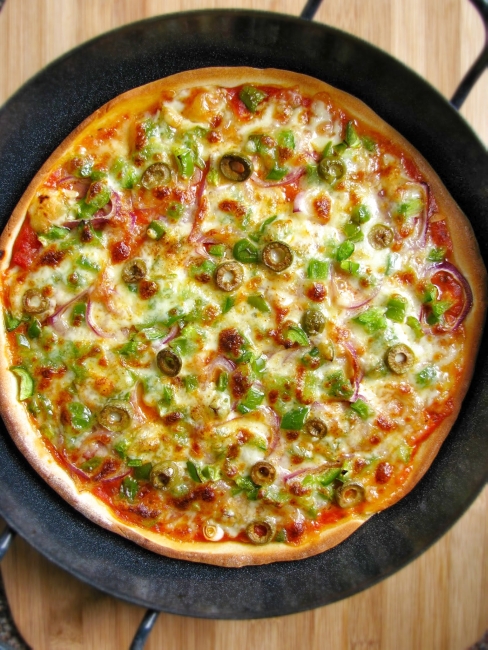 The result? Not too bad, not bad at all actually. It won't have the texture and elasticity that some of the more traditional pizza dough bases have, but if you're a fan of light and crispy crust, this pizza should be just right for you, and no expert kitchen skills are needed to make it either ;)

How to make it...
Ingredients

Pizza base:
- 1 1/2 cups of self-raising flour, plus extra, for dusting
- 1/2 cup of tepid water
- pinch of salt
- olive oil
For the topping (really up to you what you like best):
- a small jar of tomato sauce (I had Bolognese tomato sauce in my cupboard)
- garlic cloves, finely chopped and added to tomato sauce
- a handful of green olives, sliced
- 1 green pepper, deseeded and diced
- small red onion, cut in half and thinly sliced
- few slices of vegan ham, cut into smaller pieces (like Quorn vegan ham or chicken one)
- 1 vegan mozzarella ball, torn into small pieces
Other toppings that we also like a lot: artichoke pieces, mushrooms (sliced), vegan cheddar cheese (grated or thinly sliced), cherry tomatoes (cut in half), spinach leaves, asparagus...

Method:
- Put 1 1/2 cup of flour into a food processor, then half-fill the same cup with tepid water and add to the flour with a pinch of salt and a glug of olive oil. Whiz until smooth, if you don't want to use the food processor (like myself) just use your hands to do the job.
- Tip the dough on the floured board. Sprinkle the top of the dough and the rolling pin with flour (it will be quite wet, so be generous).
- Roll the dough to a 1 cm thickness.
- Drizzle some olive oil onto an oven safe, quite big pan, then dust dough with flour again and very lightly fold it over into a half-moon shape.
- Lightly fold the half-moon in half, then move the dough to the pan and unfold it, pushing it down into the sides of the pan. If you don't have a big enough pan, halve the dough and make two pizzas.
- Pour the tomato sauce over the middle of the pizza base and spread out evenly.
- Arrange all your ingredients on the pizza base and at the end tear mozzarella into small pieces and dot around.
- Place the pan on the stove on a high heat for 3 minutes.
- After about 3 minutes put the pan under the hot grill for about 5-7 minutes, until all the toppings are golden and cooked through.
- Remove the pizza from the pan and transfer it to a wooden board/plate. Eat hot. 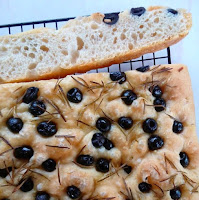 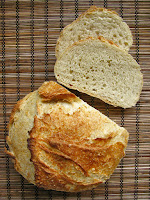 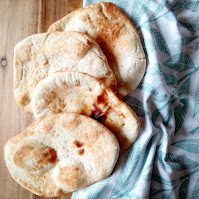 Have you made any of my recipes? Tag @anulaskitchen on Instagram and hashtag it #anulaskitchen
Baking - Bread rolls etc.