October 07, 2013
With plenty of apples and blackberries in the house, a cake was in order. My first thought was to make a crumble, as it is favourite with my two little helpers, but... How many crumbles can one eat, before one gets bored of them...?
Just by a pure coincidence, while flipping through a magazine, I stumbled across something called  "a cobbler". I've heard about them many times, but never really gave them much of a thought. Well, now was the time! 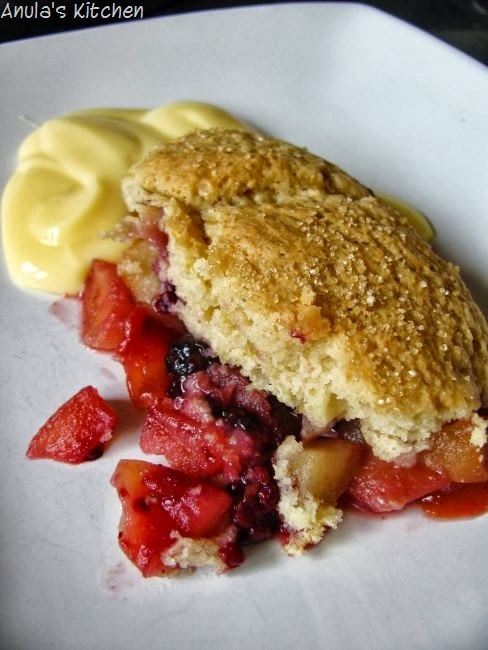 The result is just fantastic. A topping, which is something between a sponge cake and a bound cake. Very light, not dense at all (which I was afraid of) and a kind of crispy crust on the top. So, now to my fruit choice, which I "pimped up" a bit, as I sautéed the apples in apple cider and sugar to make them softer and give them more flavour. 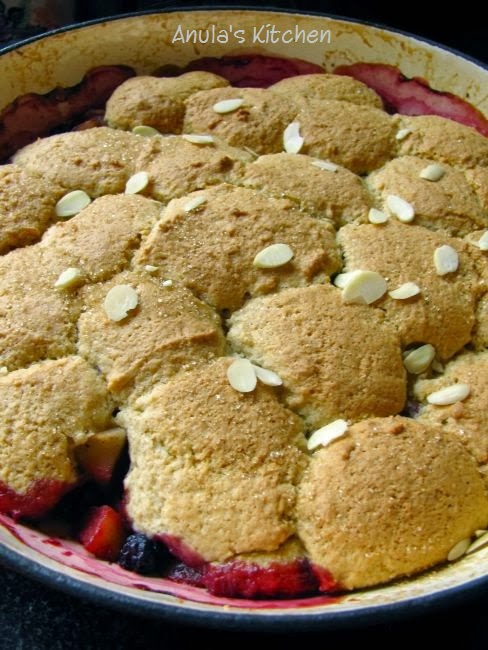 Method:
- Prepare, spread out your chosen fruit in an oven proof dish adding about 100 g sugar, depending on how ripe/sour your fruit are (if you're using apples you might want to precook them a little with sugar, as to soften them).
- Preheat the oven to 190 C.
- Sift the flour, baking powder, the 100 g of caster sugar and a pinch of salt into a bowl or a food processor, add the butter and work together until the mixture looks like fine breadcrumbs.
- Add aquafaba egg into the buttermilk and beat together well.
- Add to the dry ingredients and mix together lightly into a soft, sticky dough.
- Drop walnut-sized spoonful of the mixture over the top of the damsons, leaving a little space between each one, then sprinkle with the flaked almonds and the remaining 1 tablespoon of sugar.
- Bake in the oven for 30-35 minutes until golden and bubbling, covering it loosely with a sheet of foil if it is browning a little too quickly.
- It is done when a skewer, pushed into the middle of the cobbler topping, comes away clean.
- Leave to cool briefly before serving with some custard, double cream or ice cream. 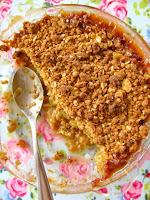 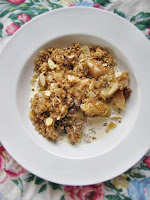 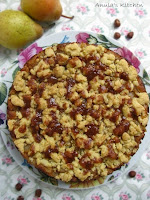 Have you made any of my recipes? Tag @anulaskitchen on Instagram and hashtag it #anulaskitchen
Cuisine - Irish Desserts cold & hot