August 22, 2013
"The Sopranos family cookbook:
As compiled by Artie Bucco" 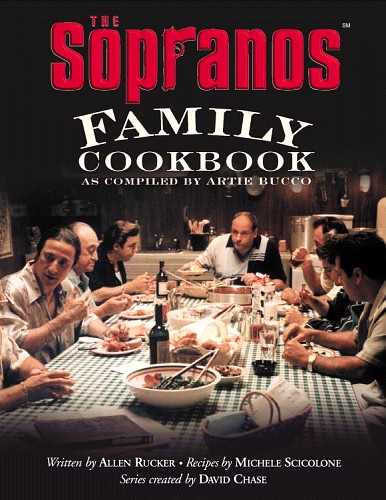 I'm a BIG fan of the TV series "The Sopranos", I've spend almost my whole pregnancy with my first baby by binge watching The Sopranos and eating copious amounts of pasta with tomato sauce... Not my proudest moment in my life, but definitely one of the better ones ;) When I heard that there is in fact a book, a cookbook accompanying the TV series, you guessed it, I simply had to have it!
If you are The Sopranos fan, a true Sopranos fan and happen to like food as well, you have to have it. Simple as that. If you watched even only one episode, you'll know that the food is an important part of their lives - they are eating something almost constantly, which I guess isn't that unusual considering their Italian heritage. Family gathering - food, funeral - food, meeting at the Bada Bing - food, meeting among the big bosses - food.
All the recipes in this book are simple to follow and with very clear instructions. You won't find ingredients that are hard to get, so all the dishes in the book will be accessible and easy for you to prepare. The dishes I'm immediately thinking of when watching The Sopranos (mainly because they are "family favourite" and always present) are: Struffoli, Giambotta, Manicotti or Ziti al Forno. 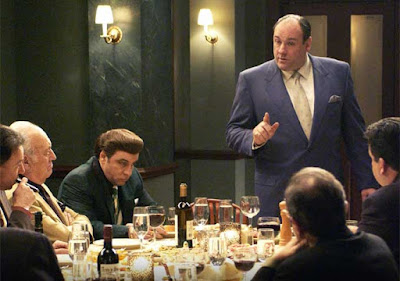 This book isn't a cook book as we know it. It's more a little history of The Sopranos Family and Italian/USA cooking traditions. The big appeal of this book is the way in which it ties with the show itself.
The Sopranos series is present here in the form of in-character narrations (different in each chapter) - Artie Bucco gives the history of Vesuvio's and shares a chapter of restaurant style recipes (he's also the main narrator in the book), Charmaine Bucco discusses the challenges and etiquette of professional catering before revealing some recipes, that are easily prepared for a bigger crowd of guests, Adriana La Cerva presents a chapter on romantic recipes and tips for that perfect "dinner for two", Tony himself talks about the perfect BBQ party and Carmela about family gatherings.
The chapters show characters well too, especially Janice's self-centred and artificial memories of days growing up around The Soprano family table and Uncle Junior's views (not only on food). There are many photographs directly from the show, as well as some letters and other family "keepsakes". If you, as I, love The Sopranos... you really need to have this cookbook in your collection (not only for its culinary value).
"Entertaining with The Sopranos:
As compiled by Carmela Soprano"
Hardcover, 208 pages, Chapters 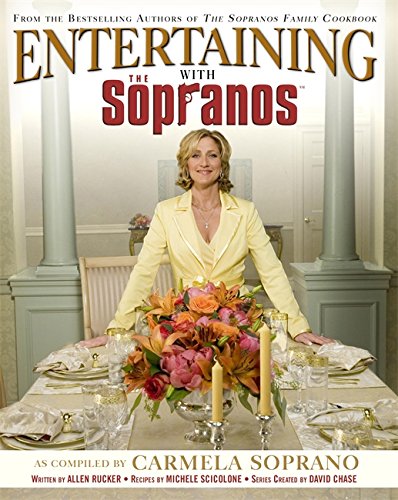 As I already thought, that nothing else in terms of The Sopranos cooking can happen, it's exactly when they decided to do it again - they've published another book tied to the show. A dear friend of mine, who happens to know about my obsession, surprised me with this little title. Sadly, she's not with us anymore, but the book sits proudly on my bookshelf reminding me of her and her friendship (it's also the reason why I might cherish this book that little bit more too)…
As with the first The Sopranos cookbook, this one also tells "a story". It's narrated by one and only Carmela, as she's truly "the hostess with the mostess". The book concentrates on bigger gatherings, occasions for celebrations and eating, eating that's sometimes over the top, elaborate, but true to the Soprano style. Again the book is full of photo scenes from the show, little "interviews" with the main characters and some good recipes too. With this cookbook no family/friends gathering should be a challenge anymore. From tips to hosting, as well as cooking, this book is actually quite informative. 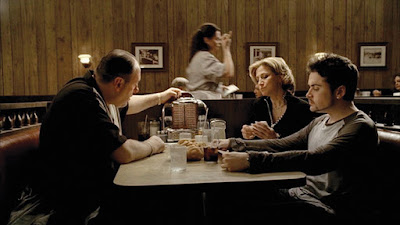 You can definitely appreciate how the food is a big part of The Sopranos, and I, for one, am very happy with that. You know, even the very last, final scene of the series was, yet again, with the food in the background, or at its centre - depends how you look at it...
Anula's Kitchen - Cookbook reviews