March 26, 2013
I'm always looking for Easter with anticipation.... It's a great time of the year and more so, there are few dishes/foods that we would enjoy only around Easter. My "affair" with the cross hot buns is like the one with the mince pies during Christmas - I just love them and can't get enough of them! It's the first time ever though, that I was able to try the home made version, and as with everything - way better than the shop bought one.
Those little sticky buns are sweet, loaded with sultanas, mixed peel and cinnamon - oh sooooo good! I admit, that there's a bit of work involved in making them, but nothing too complicated, and the result is well worth all that effort. 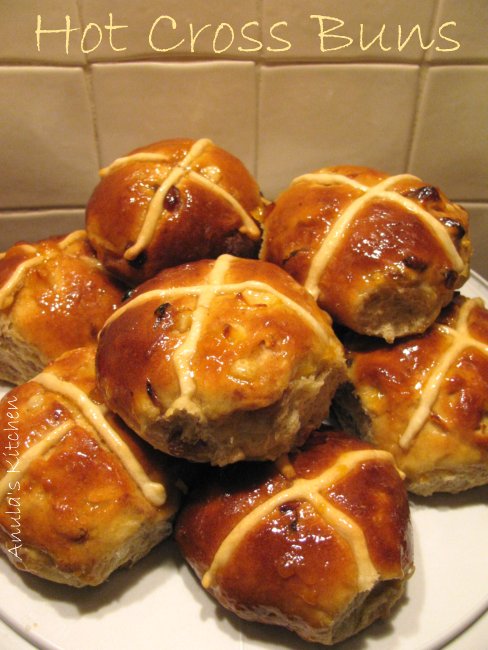 "A hot cross bun is a spiced sweet bun made with currants or raisins and marked with a cross on the top, traditionally eaten on Good Friday. In many historically Christian countries, buns are traditionally eaten hot or toasted during Lent, beginning with the evening of Mardi Gras (the evening before Ash Wednesday) through Good Friday, with the cross standing as a symbol of the Crucifixion." - by Wikipedia.org

- Put the flour into a large mixing bowl. Add the salt and sugar to one side of the bowl and the yeast to the other.
- Add the butter, aquafaba eggs, milk and half the water and turn the mixture round with your fingers.
- Continue to add the water, a little at a time, until you've picked up all the flour from the sides of the bowl. You may not need to add all the water, or you may need to add a little more - you want dough that is soft, but not soggy. Use the mixture to clean the inside of the bowl and keep going until the mixture forms a rough dough.
- Tip on to a lightly floured surface and knead by holding the dough with one hand and stretching it with the heal of the other hand, then folding it back on itself. Repeat for 5 minutes until smooth and elastic.
- Put the dough in a lightly oiled bowl.
- Cover with oiled cling film and leave to rise in a warm place for 1 hour or until doubled in size and a finger pressed into it leaves a dent.
- Tip the dough onto a lightly floured surface and scatter in the sultanas, mixed peel, orange zest, apple and cinnamon.
- Knead into the dough, making sure everything is well distributed.
- Leave to rise for 1 hour more, or until doubled in size, again covered by some well-oiled cling film to stop the dough getting a crust.
- Divide the dough into 12 even pieces.
- Roll each piece into a smooth ball on a lightly floured work surface.
- Arrange the buns on one or two baking trays lined with parchment, leaving enough space for the dough to expand.
- Cover with more oiled cling film, or a clean tea towel, then set aside to prove for 1 hour more.
- Heat oven to 220 C.
- Mix the flour with about 5 tablespoons water to make the paste for the cross - add the water 1 tablespoon at a time, so you add just enough for a thick paste.
- Spoon into a piping bag with a small nozzle.
- Pipe a line along each row of buns, then repeat in the other direction to create crosses.
- Bake for 20 minutes on the middle shelf of the oven, until golden brown.
- Gently heat the apricot jam to melt, then sieve to get rid of any chunks.
- While the jam is still warm, brush over the top of the warm buns and leave to cool. 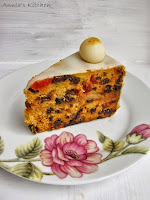