September 23, 2011
It is a widely known and liked soup, not only in Poland, but in best part of Eastern Europe. I used sour beetroot juice I made earlier myself, but you can easily add acidity to your barszcz by adding either vinegar or lemon juice - it's not 'authentic', but you'll get pretty similar result (you can also buy beetroot barszcz essence in Polish/Eastern European grocery shops all over the world).
Barszcz in Poland is mainly eaten on Fridays, as it's traditionally a  vegetarian soup. In many parts of Poland it's also part of traditional Polish Wigilia, which is a Christmas Eve dinner.

Very often barszcz is served with a hard boiled egg and boiled, diced potatoes, sometimes with a teaspoon of cream to make it less sour for some. 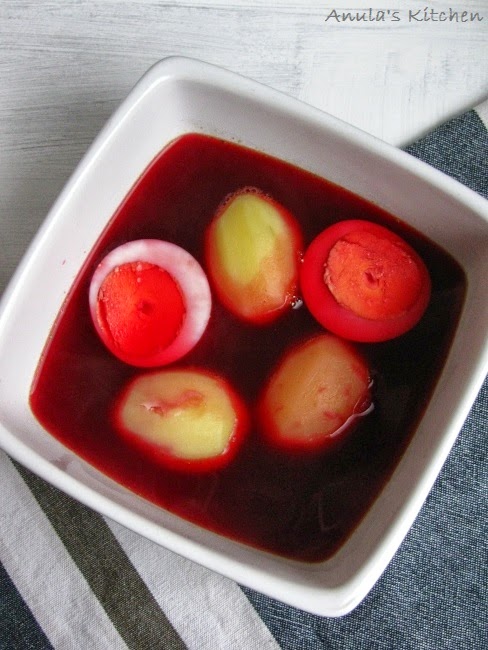 "The basic Polish borscht (barszcz) recipe includes red beetroot, onions, garlic, and other vegetables such as carrots and celery or root parsley. The ingredients are cooked for some time together to produce a clear broth (when strained), and the soup is then served as boullion in cups or in other ways. Some recipes include bacon as well, which gives the soup a distinctive "smoky" taste. (...) A key component to the taste of barszcz is acidity. While barszcz can be made easily within a few hours by simply cooking the ingredients and adding vinegar, lemon juice, or citric acid; the traditional way is to prepare barszcz several days in advance and allow it to naturally sour. Depending on the technique, the level of acidity required, and the ingredients available, barszcz takes 3–7 days to prepare in this way." - by Wikipedia.org
How to make it...
Ingredients:
- 1 l sour beetroot juice (you can add few beetroots from the fermentation process too if you like)
- 0,5 l vegetable stock
- few dry wild mushrooms (soaked for 5 minutes in tepid water, then drained)
- salt, pepper, bay leaf, 2 all spice berries

Combine all the ingredients in a pot and boil for few minutes. Check seasoning. Also if it's too sour you might want to add a teaspoon of caster sugar. Serve with traditional Polish uszka or simply with boiled potatoes and/or hard boiled egg.

The above is a basic recipe. If you don't have fermented beet juice make 1-1 1/2 vegetable stock, take 3-4 beetroots, peel and dice them and boil till tender in the stock. Add vinegar or lemon juice to make the soup sour. Then add the spices as per above. 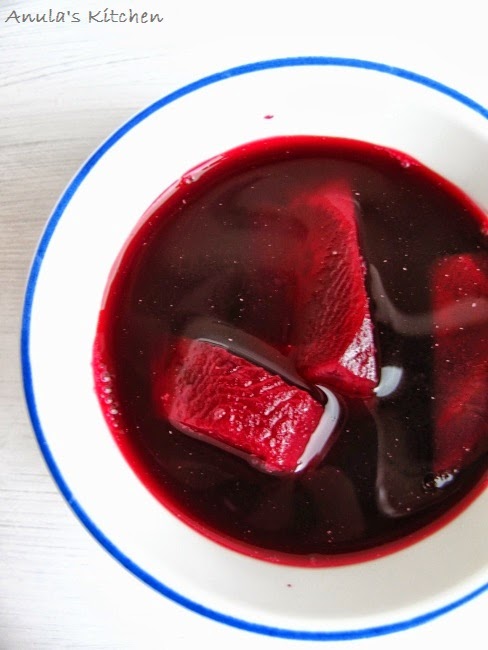 Have you made any of my recipes? Tag @anulaskitchen on Instagram and hashtag it #anulaskitchen
Cuisine - Polish Soup of the day