March 15, 2011
It was my birthday yesterday and yes I baked a cake, but I also baked some cookies. I wanted to make my Dad's cookies but decided against it and tried something completely new instead - why make something again and again, when you can discover something completely new?! The Cointreau liquor in those cookies is quite an ingenious idea, as an extra ingredient and it works beautifully! 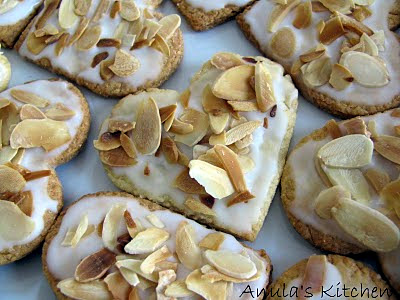 About Cointreau liqueur..."it's a brand of triple sec liqueur, and is produced in Saint-Barthélemy-d'Anjou, a suburb of Angers, France. Cointreau sources its bitter oranges from all over the world, usually Spain, Brazil and Saint-Raphaël, Haiti. Alexis Lichine states that its primitive name was "Curaçao Blanco Triple Sec". In addition to being imbibed as an apéritif, Cointreau is sometimes used as a digestive. Cointreau is considered to be either a triple sec or a unique category of liqueur. With a 40% alcohol content, Cointreau is strong for triple sec, which usually has an alcohol content of between 15 and 40 percent." - by Wikipedia.org

- Preheat the oven to 180 C.
- Mix the sieved flour, ground almonds and sugar in a large bowl and rub in the butter until the mixture resembles breadcrumbs.
- Add the aquafaba egg and Cointreau and mix together well to form a dough.
- Leave to rest for 10 min.
- On a lightly floured surface roll the dough until approx. 4 mm thick.
- Cut into shapes of your choice.
- Place on a baking sheet and bake for about 10 minutes or until golden brown.
- Allow to cool completely on a wire rack.
To make the icing
- Sift the icing sugar and add the Cointreau and water.
- Stir until smooth, adding more water if required.
- Spoon a little icing into the centre of each biscuit and smooth out to the edges.
- Sprinkle immediately with toasted almonds and leave to set. 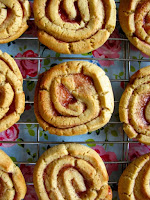 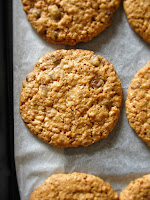 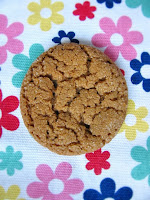 Have you made any of my recipes? Tag @anulaskitchen on Instagram and hashtag it #anulaskitchen
Baking - Cookies & Bars