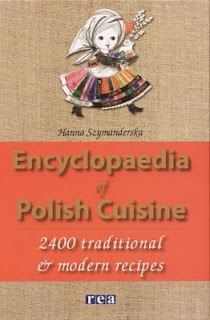 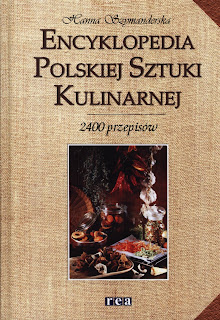 As I'm Polish, you would assume that Polish cuisine has no mysteries for me... but it's completely the opposite. The Polish cuisine is complex, with a rich history, influences from Eastern Europe, as well as France, Germany and, on top of all that, each and every region of Poland, has their own recipes and local traditions, including those culinary ones. Me and my Husband got this book as a wedding present, which was a very thoughtful gift for a Polish couple living on emigration in Ireland.

The Encyclopedia of Polish Cuisine is a source of information about Polish cooking years ago and today, it covers both "haute"/official cuisine, reserved for those special occasions and everyday recipes from various parts of Poland. The twenty(!!!) chapters of the book include recipes for flavoured butters, dips, soups, flour-based dishes, egg and cheese dishes, kashas and rice, potatoes, side dishes, sauces, fish, meat, poultry, game, mushrooms, vegetables, desserts, cold and hot drinks, cakes, liqueurs and preserves. The author Hanna Szymanderska presents such well-known dishes as chicken broth or pork chops, but you will also find some long-forgotten recipes for crayfish, stewed hazel grouse, quail nests or coot in cranberry sauce but...

The book is written in an easy and understanding language, but... and there is a big BUT... unfortunately the author uses very patronizing tone, so unless you're a very good cook, who knows their way around kitchen, you won't achieve anything worth eating. The author tries to aspire for that "better" reader, or assuming that we all are virtuoso in the kitchen, but it completely does not deliver. I've found mistakes in good few of the recipes. As mentioned already the book covers lots of recipes, and I mean A LOT, many various techniques and I think, that quantity took more important role than quality. It gives an impression, that recipes were included without checking them/cooking from them at all...
Overall the book is a good summary of the Polish culinary traditions, but because of many mistakes in the recipes, and very pretentious tone of the book, I wouldn't really recommend it to someone who doesn't have any idea about Polish cooking/baking and haven't cooked anything Polish before. It's more of a 'tale' about traditions, roots of Polish cuisine rather than a good and useful compendium of recipes.
A quick sum up - don't waste your money on this one, there are many other cookbooks out there on the topic of Polish food, ones that will actually help you produce something delicious and will teach you a thing or two. I really do not enjoy writing bad reviews, but I simply don't want you to have a bad experience with such a fantastic food/cuisine, like Polish culinary traditions.
Anula's Kitchen - Cookbook reviews