Recently I have promised myself, that I'll buy and try one new thing (food related) every week. This is my very first purchase of the sort and it's Gorgonzola cheese - Gorgonzola Dolce to be exact. I've heard about this cheese many times, saw many recipes with it, but have never, ever tried it. What a shame! I was pleasantly surprised with it too. It had creamy texture, had to spread it on my crostini rather than be able to slice it. I was afraid that the blue veins will be too strong -> no, they aren't! They give a little hint of something, breaking the creaminess of the cheese itself, but in no way is it too strong. It also smells very light and mellow. 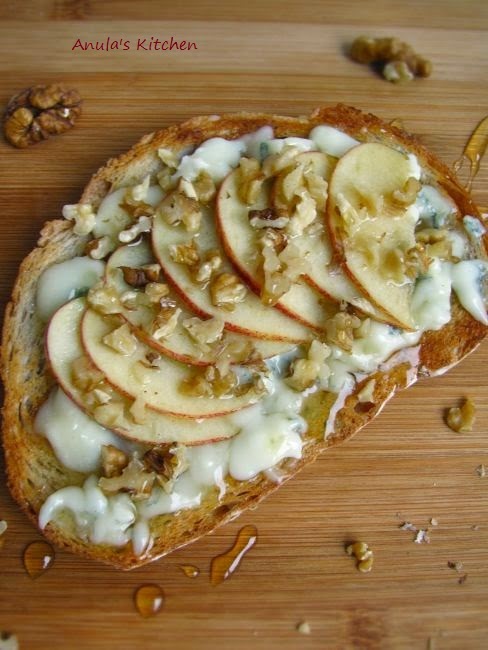 "Gorgonzola is a veined Italian blue cheese, made from unskimmed cow's milk. It can be buttery or firm, crumbly and quite salty, with a "bite" from its blue veining. It is mainly produced in the northern Italian regions of Piedmont and Lombardy. Whole cow's milk is used, to whichstarter bacteria is added, along with spores of the mold Penicillium glaucum. Penicillium roqueforti, used in Roquefort cheese, may also be used. The whey is then removed during curdling, and the result aged at low temperatures.
During the aging process metal rods are quickly inserted and removed, creating air channels that allow the mold spores to grow into hyphae and cause the cheese's characteristic veining. Gorgonzola is typically aged for three to four months. The length of the aging process determines the consistency of the cheese, which gets firmer as it ripens. There are two varieties of Gorgonzola, which differ mainly in their age: Gorgonzola Dolce (also called Sweet Gorgonzola) and Gorgonzola Piccante (also called Gorgonzola Naturale, Gorgonzola Montagna, or Mountain Gorgonzola). " - by wikipedia.org 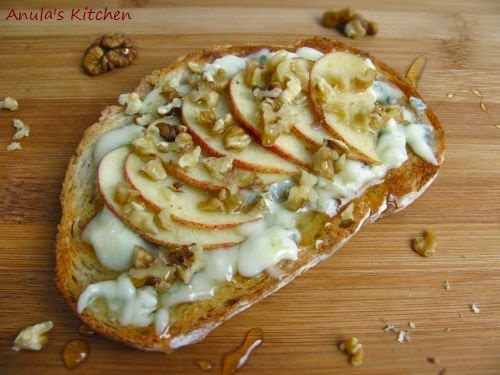 How to make it...
Ingredients:
- few slices of bread of your choice with some butter spread on both sides (can be baguette, ciabatta, I used sourdough bread)
- Gorgonzola cheese
- 1 apple, thinly sliced,, cores removed
- few walnuts, roughly chopped
- few teaspoons of runny honey

Toast or grill your bread (I simply fried it on a pan, until butter has melted and the bread got a nice, light brown colour). When it's still warm spread generously some Gorgonzola on top and it will slightly melt. arrange your sliced apple, sprinkle with walnuts and just before serving/eating drizzle with honey.