Probably everyone, but everyone heard (if not even tried) New York style cheesecake. Well, I've heard about it many times, but tried it for the first time in my life, only now. I have to admit something here, I'm not a fan of lemony cakes, lemon creams etc. as I always find them tasting somewhat "fake", like a washing up liquid (that's how I fell about them anyway). This wasn't the case here though. I liked the cheesecake a lot, and I mean a lot! Mind you, it is very rich and I needed a good cup of strong coffee with it. The only bit that was too lemony for me was that lemon cream topping. All in all I loved it! But next time round I think I'll swap the lemony cream on top for the raspberry one, so the sharpness of the raspberries will cut through the very rich cheesecake. If you haven't tried New York style cheesecake yet - do it! And do it asap, cos you don't know what you're missing! 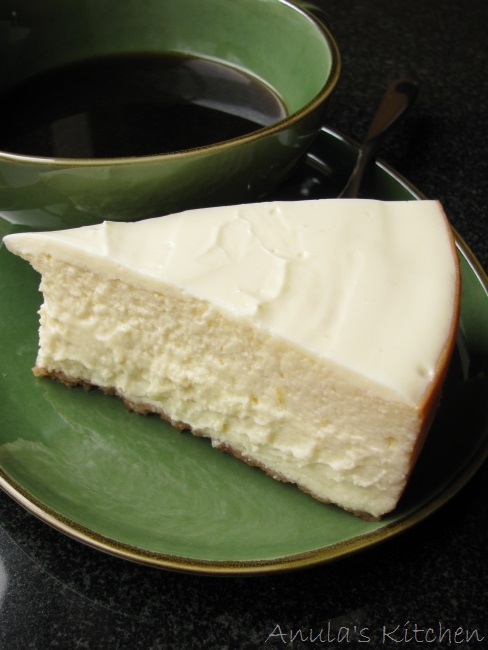 "New York-style cheesecake relies upon heavy cream or sour cream. The typical New York cheesecake is rich and has a dense, smooth and creamy consistency. Sour cream makes the cheesecake more resilient to freezing and is the method by which most frozen cheesecakes are made. However, a lavish variant uses sour cream as a topping, applied when the cheesecake is cooked." - by wikipedia.org

How to make it...
Ingredients:

Preheat the oven to 170°C.
For the crust, stir the graham crumbs, sugar and melted butter until evenly combined and press this into the bottom of an ungreased 9-inch spring form pan. Bake this for 10 minutes, then cool. Brush the sides of the pan with a little melted butter .
For the cheesecake, increase the oven temperature to 200°C. Beat the cream cheese until light and fluffy. Add 220 g sugar a little at a time, and scraping the sides and bottom of the bowl often. Beat in the corn-starch, vanilla and lemon zest. Beat in the eggs one at a time, on a lower speed, and scraping after each addition, then beat in the yolk. Still on low speed, beat in 180 ml of sour cream. Scrape this over the cooled crust.
Bake the cheesecake for 10 minutes at 200°C and then reduce the oven temperature to 105°C and bake for 25 more minutes. Turn off the oven, and leave the cheesecake in for an hour, cracking the oven door after 30 minutes. While the cheesecake is baking, prepare the sour cream layer.
Stir the remaining sour cream with the remaining 2 tablespoons of sugar and the lemon juice. Spread this over the top of the cheesecake as soon as it has come out of the oven. Allow the cheesecake to cool completely to room temperature, then carefully run a spatula around the outside of the cheesecake to loosen it from the pan, then chill the cheesecake for at least 6 hours before slicing and serving. The cheesecake will keep, refrigerated, for up to 4 days. 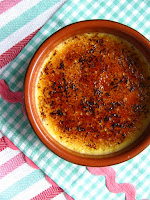 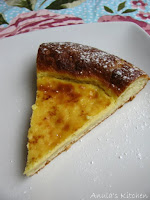 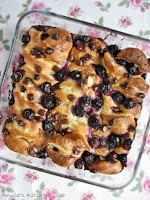