"Kremówka, napoleonka is a Polish type of cream pie. It is made of two layers of puff pastry, filled with whipped cream, creamy butter cream, vanilla pastry cream (custard cream) or sometimes egg white cream, and is usually sprinkled with powdered sugar. It also can be decorated with cream or covered with a layer of icing.
The cake itself is a variation of mille-feuille - a French dessert made of three layers of puff pastry filled with cream or jam - also known as the Napoleon.
On 16 June 1999 pope John Paul II mentioned that after he had completed his matura exam, he had kremówkas with his colleagues in his home town of Wadowice. They wagered who could eat more. The future Pope ate eighteen kremówkas but did not win the bet.

And there was a cake shop. After the matura (matura is a Polish equivalent of a leaving certificate exam) we went for kremówkas. That we survived that all, those kremówkas after the matura....
—Pope John Paul II

This was hugely publicized by media, and "papal" kremówkas from Wadowice became popular in Poland. "Papal kremówkas" are filled with pastry (custard) cream." - by Wikipedia.org 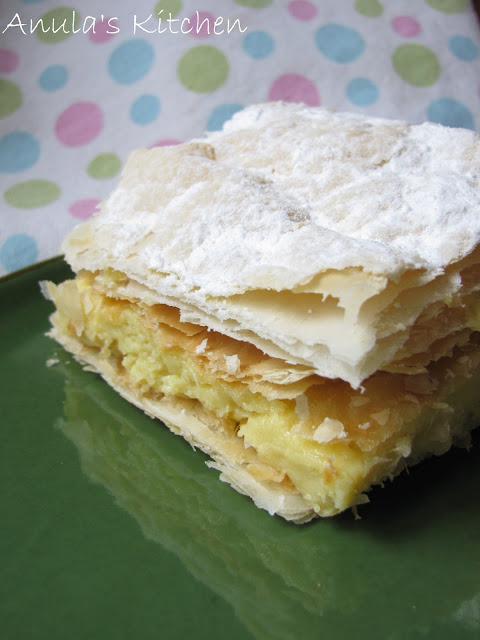 Everyone, but everyone, heard about kremowka in Poland. That's also due to Pope, who was so fond of them. I ate them few times in a cafe or a cake shop, but never made one myself. And this time, I didn't make it either - I just baked the puff pastry and it was my Hubby, who was responsible for making the crème patissière. We didn't know exactly where to find a good and reliable recipe for the cream, but fortunately Raymond book came to the rescue! It's actually quite easy to make and it's very smooth, light and... delicious!

How to make it...
Ingredients
Pastry:
- ready made puff pastry, 2 sheets (or you can make your own puff pastry)

Pastry:
Bake your puff pastry sheets as per instructions, leave to cool completely before using.

In a large mixing bowl, whisk together the eggs and sugar until they turn a pale blonde colour.
Whisk in the flour and cornflour and set aside.
Place the milk and vanilla syrup in a heavy-bottomed saucepan, bring to a boil and simmer for about five minutes.
Remove the pan from the heat and let cool for 30 seconds.
Pour the hot milk onto the egg mixture, whisking all the time, then return the mixture to the pan. It is important to pour the hot milk onto the cold eggs before you return the mixture to the pan to prevent the eggs from scrambling.
Bring the mixture back to the boil and simmer for one minute, whisking continuously, or until smooth.

Assembling:
Spread evenly warm pastry cream on one sheet of your baked puff pastry. Cover your cream with second sheet of baked puff pastry. Sprinkle with dusting sugar. It's best to put it into the fridge for minimum one hour before serving. It's easier to cut that way.