Yorkshire pudding - light as a feather and sooo delicious...

Since I've been living in Ireland, I have heard about Yorkshire puddings a lot, mainly on British cookery programms. I wanted to try it and I finally did, have to admit that it was way too late! I should have tried making it earlier, so I would have been enjoying this delicious, little things sooner, rather than later ;) It's perfect accompaniment to a nice nut roast with gravy, not to mention, that it's "easy-peasy" to make (I've seen bags of them in a supermarket, in a frozen food isle, wouldn't even dream of buying them instead of making myself). Also, I think they'll be perfect for a small party, kids like them a lot too! 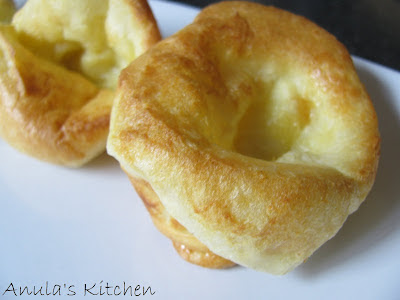 "Yorkshire Pudding is a dish that originated in Yorkshire, England. It is made from batter and usually served with roast meat and gravy. A 2008 ruling by the Royal Society of Chemistry has it that "A Yorkshire pudding isn't a Yorkshire pudding if it is less than four inches tall". The Yorkshire pudding is a staple of the British Sunday lunch and in some cases is eaten as a separate course prior to the main meat dish. It is often claimed that the purpose of the dish was to provide a cheap way to fill the diners - lunten of the meal - thus stretching a lesser amount of the more expensive ingredients as the Yorkshire pudding was traditionally served first. There are other uses for Yorkshire pudding. In various parts of the country - but particularly in the North - it is served as a snack with jam, or as a 'pudding' in the true sense, sometimes with jam and ice cream." - by Wikipedia.org 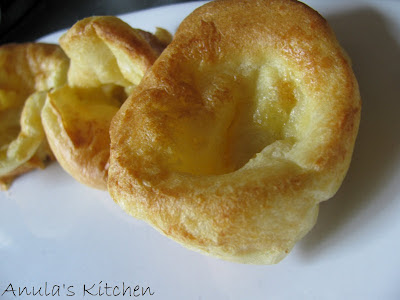 The below recipe comes from Darina Allen's recipe from "Ballymaloe Cookery Course" cookbook.

Combine flour and salt in a bowl, add eggs and stir. Add the milk, melted butter and mix until well combined. Allow to stand for 1 hour (that's an important step!).
Preheat your oven to 200 C. Grease a baking tin/muffin tins and preheat in the oven till piping hot. Fill your tins half to two-thirds full with batter. Bake for about 20 minutes until your puddings are well risen and lightly browned. Remove from the tins and serve warm.

Cuisine - British Recipes by others