French onion soup is something my husband always wanted to try and we finally made it. The general opinion about it was divided - he absolutely loved the soup, I liked it, but if I don't eat it ever again, I don't think I'll cry over that... but saying all that I was quite surprised by its sweet taste and very soft texture of the onions, but still coming with a little of that distinctive oniony tang. If you like onions - try this recipe, you'll probably ending loving it. I like onions in general, but for the amount of work and time that this soup makes - I was expecting something much better. Guess maybe I just had too much expectations to start with... 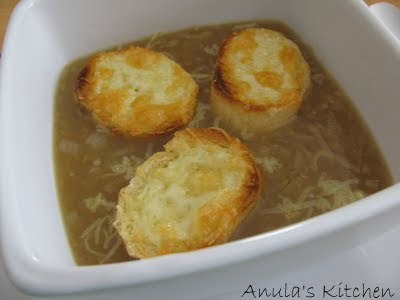 The below recipe comes from one of Raymond Blanc's books.

"French onion soup (Soupe à l'oignon) is an onion and beef broth or a beef stock based soup traditionally served with croutons and cheese as toppings... Onion soups have been popular at least as far back as Roman times. They were, throughout history, seen as food for poor people, as onions were plentiful and easy to grow. The modern version of this soup originates in France in the 18th century, made from beef broth, and caramelized onions. It is often finished by being placed under a broiler in a ramekin traditionally with croutons and gruyère melted on top. The crouton on top is reminiscent of ancient soups." - by Wikipedia.org

On a high heat, in a large non-stick saucepan, melt the butter without letting it brown. Add the onions and soften for 5 minutes, stirring frequently. Season with 10 pinches of salt and 2 pinches of pepper.
Continue cooking the onions for 20–30 minutes to achieve an even, rich brown caramel colour. Stir every 2–3 minutes to prevent burning. Stir the flour into the caramelized onions and mix thoroughly. Gradually stir in the white wine and one third of the boiling water. Whisk well and add the remaining water. Bring to the boil, skim off any impurities from the surface and simmer for 15 minutes. Taste and correct the seasoning, adding the sugar if required.
Arrange the baguette slices on a baking tray and sprinkle two thirds of the grated Gruyère over them. Place under a hot grill for 3–4 minutes to melt and slightly brown the cheese. Serve the soup in bowls, with the croûtons on top. Serve the remaining Gruyère separately.